In the years preceding the return of the Holy See from Avignon to Rome, Cardinal Anglic de Grimoard, younger brother of Pope Urban V, was named Vicar and Papal Legate of the March, Romagna, Umbria and Tuscany. Following his brother’s death he decided to quit his mandate and to gather and draft some information and suggestions to be handed to his designated successor, the “Praecepta”, setting forth, for each territory, opinions and assessments of government functions and measures, unsolved issues yet to be addressed and the problematic relations with the local population and with the administrative office still in force. Aside from his considerations, in autumn of 1371 the Cardinal gathered all the news that could be useful for providing detailed knowledge of the several situations. Some of the relevant reports include the “Descriptio civitatis Bononie eiusque Comitatus…”. The original texts of the two sources – paired for the first time owing to the curatorship of the authors, Rolando Dondarini and Beatrice Borghi – are a precious tool for studying the history of Bologna in the early Middle Ages.
Have a look at the contents. 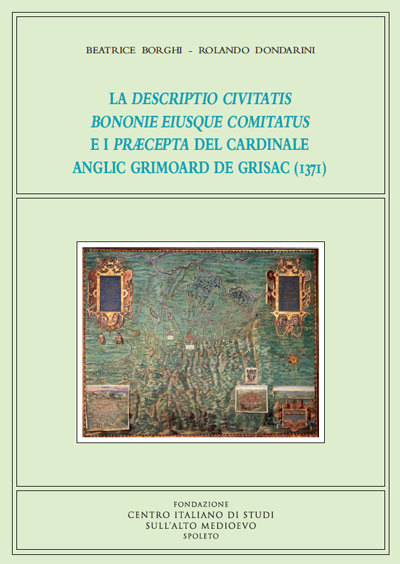